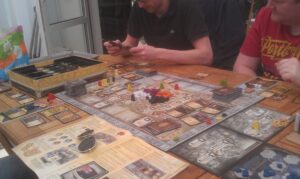 Once every other month me and my friends get together to play board games. Everyone brings the games they own and we also bring new games we think the others might like. We start at eleven and play for about two or three hours and then the person we are at serves lunch. After lunch we play for another four or five hours before we go out to eat at a restaurant close by. The evening is finished with 3-6 hours of even more gaming depending on the level of energy we have after playing for so many hours.

The games I brought.

I can only bring a few of my games since I own to many to carry so I brought two bags of games and I included two of my newest games: Lords of Waterdeep and One Night Ultimate Werewolf.

We started out playing Lords of Waterdeep since I spoke so well of it after trying it out with another friend. I quickly summarized the rules and since my friends are all used to playing games they got the hang of them pretty quickly. The verdict: They loved it! After the first game we played another one, and another, and another. They couldn’t get enough of it. One of the reasons was probably due to the fact that almost all of the games were a really close race. 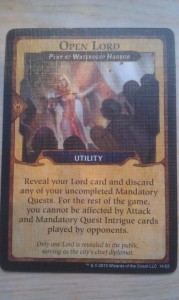 Only one game was totally squewed and that was when I got the Open Lord card on the first round and no one had a chance. I won the game with over 100 points so we thought the card was overpowered and removed it from the following games.

We only broke off playing the game to eat and in one of those breaks I managed to get them to play a few rounds of One Night Ultimate Werewolf that really brought out a few laughs, but then they wanted to play Lords of Waterdeep again.

Overall we had a great day!