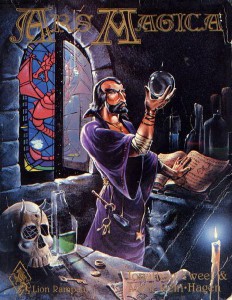 When I was younger I played a roleplaying game called Ars Magica where you were basically every player was a wizard as they were the main characters. It had one of the best rules for magic that I’ve encountered and the way to get better was to gather different magical resources associated with different kinds of magic. There were different kinds of magic realms: Heaven, Faerie, Hell and Magic.

In later editions there was also a fifth realm Reason .

As I grew older I stopped playing it but I still think about the magic system and the different realms. After having become more and more enamored with boardgames I’ve thought about actually making a board game using some basic ideas from Ars Magica.

The game I have in mind would be a battle for control over a village between the different magic realms. The village would consist of villagers that the realms would try to influence in different ways. Each villager would give a certain bonus to the realm depending on their occupation and the realms would try to get control by using typical things associated with the different realms such as the Faeries playing tricks, Heaven help and Hell corrupt. They should also be able to conjure up more and more powerful beings in order to battle each other as well as making even more impression upon the villagers

What do you think? Would it make a good board game?